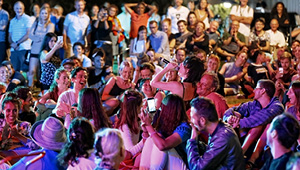 Every January, Sydney Festival enlivens and transforms Sydney with a bold cultural celebration based on big ideas and cutting-edge art and performance.

Inclusive programming, a broad range of free events and accessible pricing policies for the ticketed shows means that Sydney Festival is open to all, welcoming Sydneysiders and visitors from wherever they live.

Join us for free music events Symphony Under The Stars in Parramatta Park and Opera in the Domain, or head for Circus City in Prince Alfred Square, Parramatta, for free performances by Legs On The Wall and Sydney Trapeze School.

Throughout January, head down to the Meriton Festival Village in Hyde Park – the epicentre of Sydney Festival – for a drink and a feast, ticketed shows in the Magic Mirrors Spiegeltent, plus free performances and DJs every night.

In 2018, we’re also proud to introduce the Village Sideshow, a fun park filled with wild, wonderful and bizarre attractions. Check out the freaky virtual reality Ghost Train or sing a song on the Karaoke Carousel, plus the Village Pools, Glitterbox, Temple of Din pinball artworks, 10 Minute Dance Parties and more.

More than any other cultural event, Sydney Festival defines Sydney's personality. For over three decades we have presented international artists who guarantee headlines, and whose presence in Sydney adds to the Festival's buzz and prestige. Names like Björk, Brian Wilson, Grace Jones, Manu Chao, Elvis Costello, AR Rahman, Cate Blanchett, Ralph Fiennes, Robert Lepage, The Flaming Lips, Nick Cave, PJ Harvey, Peter Sellars, Sir Ian McKellen and David Byrne & St. Vincent, alongside some of the world's great companies - Wayne McGregor's Random Dance, Cheek by Jowl, Gate Theatre, The Wooster Group and the Schaubühne Berlin to name only a few - share the Festival with the most exciting artists and companies in Australia.

Sydney Festival's audacious contemporary programming positions it at the forefront of arts practice in Australia and up there as one of the most wonderful festivals in the world.

Sydney Festival was originally conceived by the Sydney Committee, the NSW State Government and the City of Sydney with a view to attracting people into the city centre during the holiday month of January.

The first Festival took place in 1977 and it has since grown to become one of Australia's largest annual cultural celebrations with an international reputation for modern, popular and intelligent programming. In many ways it is probably still best understood as a celebration of Sydney and its style and energy reflect the confidence, diversity and vigour of one of the world's most beautiful cities.

Sustainability Plan: Sydney Festival has a vision is to be the most sustainable major performing arts festival in Australia.

David is the Co-Founder and Managing Partner of Bailador Investment Management and Chairman of listed companies, Bailador Technology Investments, Trade Me and Kathmandu. Prior to this, he was Chief Executive Officer of Fairfax Media. His previous experience also includes a period as an advisor to the Prime Minister of New Zealand. He is currently the Chairman of Trustees of Sydney Grammar School and sits on a number of other Boards and charitable organisations.

David enjoyed a highly successful rugby career and captained the All Blacks to win the World Cup in 1987. He was awarded an MBE in 1987 and now lives in Sydney with his wife and three sons.

Prof. Larissa Behrendt is the Professor of Law and Director of Research at the Jumbunna Indigenous House of Learning at the University of Technology, Sydney.

She has published numerous textbooks on Indigenous legal issues. She is a member of the Academy of Arts and Sciences and a founding member of the Australian Academy of Law. Her most recent book is Indigenous Australia for Dummies. Larissa wrote and directed the feature film, Innocence Betrayed and has written and produced several short films.

Larissa won the 2002 David Uniapon Award and a 2005 Commonwealth Writer’s Prize for her novel Home. Her second novel, Legacy, won a Victorian Premiers Literary Award. She is the former Chair of the Bangarra Dance Theatre and a board member of NSW Museums and Galleries.

She is the Ambassador of the Guwara Aboriginal Campus at St. Andrew’s Cathedral School in Sydney and a board member of the Sydney Story Factory, a literacy program in Redfern. She was awarded the 2009 NAIDOC Person of the Year award and 2011 NSW Australian of the Year.

David was appointed by the Chamber in 2012 to advocate for the needs of leading businesses in the Western Sydney area.

In this role David sets the policy agenda by promoting discussion on issues that contribute to economic activity and growth in Western Sydney. He has been instrumental in the Badgerys Creek Airport, Powerhouse to Parramatta, and Sydney Olympic Park to Parramatta Light Rail advocacy conversations.

Paddy is a registered company auditor, a partner at PwC and is also Deputy Chair of its Board of Partners in Australia. She has over 25 years' financial experience with PwC in the UK and Australia across a broad range of clients with a focus on the retail, consumer and agribusiness sectors. She is also a Trustee of the Historic Houses Trust of NSW (Sydney Living Museums) and a governor of the Sir David Martin Foundation.

Angela holds a BA in Politics, Philosophy and Economics from Oxford University.

In collaboration with acclaimed UK writer Jimmy McGovern, Darren has also produced two series of the Logie Award-winning Redfern Now for ABC1, with a final tele-movie to screen in 2015.

He is currently Executive Producer on the factual series DNA Nation for SBS and the ABC3 teen drama series Ready for This.

Darren currently serves on the board of Screen NSW and is the Deputy Chair of the Council of the Australian Film, Television and Radio School (AFTRS), and in 2012 was the recipient of the prestigious AFTRS Honorary Degree.

Diana Eilert is a professional non-executive director. She is currently a director of ASX listed companies Veda and Navitas as well AMP Life, Networks NSW (the “poles and wires”) and Queensland Urban Utilites (water). Diana also has extensive executive experience running large businesses - such as Suncorp’s entire insurance business - as well as recent digital experience gained in her 3 years with Newscorp where she was also a director of real-estate.com.au.

Diana has a long held enthusiasm for the Sydney Festival and in her executive career was one of the major sponsors under the GIO brand.

Matthew has over 30 years' experience in the advertising and marketing industry across a range of roles in Australia and the UK. Prior to Enero, Matthew was a founding partner of BMF and was CEO for 15 years from its inception through to BMF being named as ‘Agency of the Decade'.

Matthew was Chairman of the EFFIE Advertising Effectiveness Awards for 10 years and spent 15 years as a National Board member of the peak industry body, The Communications Council and the Advertising Federation of Australia (AFA). He also served as National Chairman of the AFA. Matthew was a Board member of the international aid organisation Médecins San Frontiérs/Doctors without Borders (MSF) for 10 years.