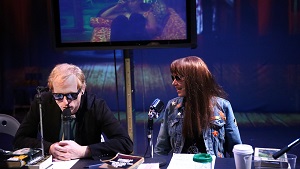 7 things you need to know about The Wooster Group

Back to
Stories
Nick Jarvis
Words
Experimental New York theatre collective The Wooster Group makes its Sydney debut at the 2018 Festival with The Town Hall Affair. Revered in theatre circles, here are seven cocktail facts you need to know about the Group before you see the play.

1. It was established within the Fluxus art movement

The Wooster Group was formed on Wooster St in Soho, Manhattan, way back in 1975 (when people other than millionaires lived in Soho). Its home for the past 42 years has been the Performing Garage, part of the Grand Street Artists Cooperative which was established within the 1960s and 70s Fluxus art movement. Fluxus was an avant-garde reaction against the perceived elitism and bourgeois banality of the art world that counts Yoko Ono, Nam June Paik and Joseph Beuys among its leaders.

2. And formed out of The Performance Group

The members of The Wooster Group were originally part of The Performance Group, an experimental theatre troupe founded in 1967 by actor and director Richard Schechner to “challenge basic assumptions about theatre,” as The New York Times wrote in 1982.

“The use of nudity and ritual, ‘environmental’ stage settings, and radical adaptations of classical texts in productions … attempted to obliterate traditional distinctions between audience and actors and their characters,” wrote the Times.

Schechner bought the building that houses The Performing Garage in 1968, but in the mid 70s, he started to put more time into teaching and travelling. Members of The Performance Group broke off and started producing their own shows, directed by Elizabeth LeCompte, and eventually became The Wooster Group.

3. Willem Dafoe was a founding member

The Group’s seven founding members included Elizabeth LeCompte (who has directed all of the Group’s performances), Kate Valk (who performs in The Town Hall Affair as Jill Johnston), the late actor and writer Spalding Gray, and Willem Dafoe, who you may know from other projects as diverse as Lars Von Trier’s Antichrist, Mississippi Burning and the original Spiderman. Watch a clip of Dafoe performing The Hairy Ape below.

The Fluxus movement was all about incorporating art into everyday life, democratising it and creating art out of normal objects (like a playable cello constructed out of TV sets). The Wooster Group took this experimental cross-media approach into the theatre, using acting techniques like anti-naturalistic acting (children playing adults, etc), and making use of live streamed and recorded video to complement the action onstage. (The Town Hall Affair features projected footage from the documentary it's based on, Town Bloody Hall, as well as Normal Mailer’s film Maidstone.)

“The result,” The New York Times wrote, “is not a linear play at all but a kind of mixed-media collage, something unique in the theater; like a Bosch or Dali canvas come to life.” Incidentally, you won’t find full footage of any Wooster Group performances online – they favour short, abstract cuts of video under two minutes long. Watch a trailer below for The Wrong Guys, a 1997 film by The Wooster Group that exemplifies this cross-media approach.

5. They’re all about original texts or radical adaptations of classic theatre texts

The Group debuted in 1975 with a series of improvised pieces based on autobiographical stories, objects and images sourced by actor and writer Spalding Gray. “We began to structure it like a piece of music (concern with rhythm), like a painting (concern with light and colour), and like a dance (concern with movement),” Gray said. In the Group’s 42 years they’ve produced 21 theatre pieces, 12 film or video pieces and five dance works. Many have been based on autobiographical stories from members of the collective, while others have used classic theatre texts like Chekhov’s Three Sisters, Phèdre and The Crucible as starting points for new work.

6. They’ve been controversial in the past

The Group lost their funding from the New York State Council on the Arts in the early 80s for blackface scenes in the play Route 1 & 9, which the Council judged to be “harsh and caricatured portrayals of a racial minority.”

The Wooster Group said that the Council had misunderstood the work, which juxtaposed a melodramatic version of Thornton Wilder’s meta-play Our Town, screening on video monitors, with live actors in blackface performing an old vaudeville routine.

“It contemplates the distinction between high art and low art and the status of white people and black people in our society,” The New York Times wrote. “The actors on the TV screen, for instance, seem much more intimate than the live actors in blackface, a paradox suggesting that the machinery is as much a cover-up for the truth as the makeup.”

7. They last performed in Australia more than 15 years ago

The Wooster Group's The Town Hall Affair uses as its source material the documentary Town Bloody Hall – a film recording of a raucous 1971 debate between leading second wave feminists and author Norman Mailer. See it at the Sydney Opera House between 7 and 13 January – watch the trailer below and book here. 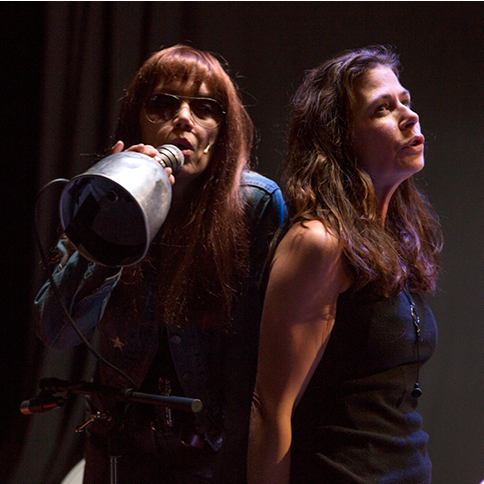